Sunday morning. Time to venture to the first of our three ministry locations: Kijabe, Kenya. Here, we would be visiting the property our home church had helped Wilfred purchase near his home to use for neighborhood ministry.  (Wilfred was our leader, driver, translator, spritual advisor, prayer warrior, and entertainer.) Today we'd be visiting a church, and seeing the property. We will also be spending time with some of the local children.

We had two cars, and decided to split up between them--no need to pack into just one. Wilfred suggested that the three of us girls went with him, as would Carl, and the boys could ride with Joseph. Later he would tell us that God told him to take the women because we might be scared! I love him! So funny.

Anyway, God made the right call, but not because we were scared. Let me explain.

From the time we left Naivasha, Joseph and the boys got swarmed by merchants, pulled over, and stuck in the mud. Really stuck.

Us ladies stayed off to the side, taking pictures and admiring the countryside. All those strapping young men on our team: football players, martial arts gurus, Army men--they could handle it!

We were stuck for over an hour. Once we finally got out of that mess, we had to climb up the mountain to reach the village. We thought we were safe until we saw these roads: 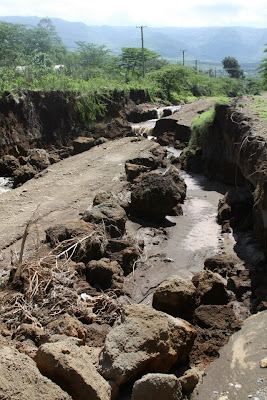 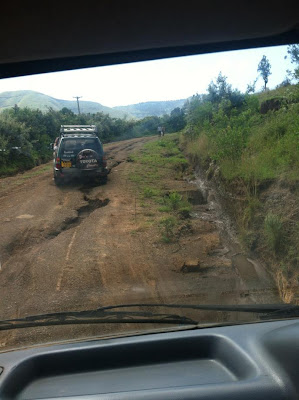 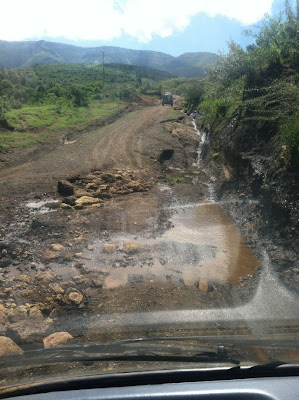 Massive rains during their wet season had washed everything out. I had never seen roads this bad in my entire life. Wilfred's driving (and Joseph's too) was amazing on this terrain. That Land Cruiser would go anywhere!

At least we had views like this on the way up, even if we were being tossed around like rocks in a dryer: Reflection of the Day: American boys don't know SQUAT about four-wheelin'. They'd never get out of the African mud!

(Please check out The Nester and the others 31 Dayers here.)