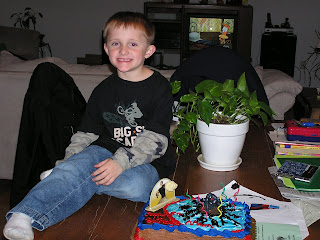 November 29, 2007: Today, my middle son turns six. It seems like just yesterday that he was saying "ku-wai" (screwdriver) and "hi-tactee" (helicopter), and pointing to ANY light and screeching "eeeeeee-Light!"

Aaron surprised us with his arrival. I was induced 4 and a half weeks early because I had HELLP syndrome, where my blood pressure skyrocketed, my liver was freaking out and my platelet count was dropping. The only "cure" is delivery, so we almost got a Thanksgiving baby instead of a Christmas one!

We had tried so hard to have him in the first place. Tests, treatments, fertility drugs - finally we got our little man. Jeff's first child, the long-awaited sibling of my son, and the answer to many prayers.

He was tough from the beginning. He weighed less than 5 pounds with his early arrival and all, but he never went to the intensive care unit or had any special treatment. He was fine, with the minor exception of being a hard-head during his hearing test. :-) We survived a few unnecessary scares, and went home after 2 days.

He has always been inquisitive, more interested in how his toys were assembled than in actually playing with them. I said he would be an engineer :-) And his incredible brain (comes from me!) just astounds us every day. We can't spell things we don't want him to hear anymore - he can figure out what we're saying. He's reading first grade books in kindergarten, and his coloring and drawing skills foreshadow an interest in art.

He has his moments of smart-mouth attitude, but can be the sweetest thing, too. He is precious, and God has blessed me abundantly by letting me borrow him from heaven for a little while.