My eight year old got his throat slashed. 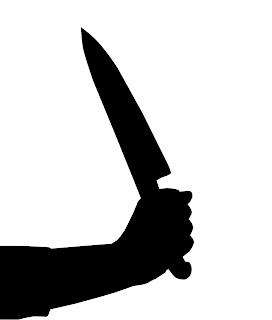 (image by sateda)
There's a title for ya, huh?

Well, it's for real.  Fortunately, it was only with a pencil and just a minor scratch but unfortunately, also enough for the offender to get suspended from school for it.

Did I mention that they're only eight?

Insane.  The kid just grabbed my boy from behind and did the slasher move, with a pencil in his hand.  Left a six-inch cut according to the incident report the teacher had to write.

Not belittling the injury to my son or anything, but I don't think The Slasher really meant any harm.  Just like kids point their fingers and pretend it's a gun, they know that a bullet is not going to shoot out of their finger.  I don't think the kid realized that his pencil actually WAS a weapon in his hand.

The sad thing is (insert old-timer voice here) "We didn't act that way when we were kids."  And we didn't.  We rode our bikes and threw old beer bottles against tree trunks. We climbed through culverts and flew on tire swings and ropes.  We blazed trails through the woods and played Pac-Man and Galaga.

We did NOT go around pretending to slash each other's throats, even in fun.

I'm not sure if I should be alarmed by the violence that has obviously escalated in the play of our children, or just accept that our world works that way now, whether you and I like it or not.  I know the Evil One just laughs and laughs whenever this kind of thing happens - watching our society lose it's moral compass and deteriorate bit by bit.

I'd like to hear your thoughts on it - do you think this is an isolated incident by a kid who has seen too many movies he shouldn't, or is this just they way it is now?