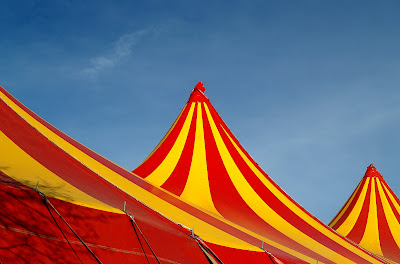 ...but this weekend we visited one instead!

Ringling Brothers and Barnum & Bailey was in town, so we loaded up the two youngest boys and away we went. Four tickets, three pretzels, two drinks, one bottled water, and a partridge in a pear tree (I mean slice of pizza) later, the show began. The guy on the bike was a riot, the white tigers were gorgeous, and the girls on those ropes, well, they are just ROCK STARS!! I mean, seriously! Anyone who will wrap themselves up in a rope and fall to the floor like a yo-yo with no net is AWESOME in my book. (Either that, or just maybe they fell on their heads one time too many.) I'll simply say that my stomach did flip-flops just watching them!

The kids were distracted by their brand-new-light-up-swirling-twirling circus toys and barely saw the white tigers after intermission. The tiger trainer was waving a piece of raw meat in front of them while a tiger hopped on his back legs in an effort to grab a bite. And she did it in a full length trenchcoat and silver high-heeled moon boots. Oh, AND she was one of the rope/rings/gravity-defying airborne girls too. I think she's my hero(ine) :-)

The guys on those spinning circle-thingies were pretty cool too. I would have peed on myself had I been blindfolded and accidentally stepped off a twirling circle of death, but he was cool about it. No body fluids. Just saved himself and kept going! My little Eli is a jumping daredevil. I sure hope he didn't get any ideas...

So, I must say that I expected cheesy, but it actually was quite entertaining. Certainly a fun family afternoon!

Although, I seriously think the civic center has gotten smaller. How did we ever fit all those Motley Crue fans in there in the 90's? (Don't go there. My BIG HAIR affected my judgement...)