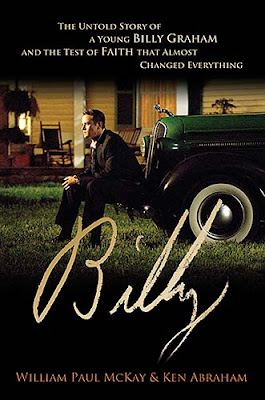 Recently I signed up to be a Book Review Blogger for Thomas Nelson Publishers. Within only a few days of signing up, I received my first book: Billy: The Untold Story of a Young Billy Graham and the Test of Faith that Almost Changed Everything.

"Billy" is the story of a young Billy Graham, as told by his friend and colleague, Charles Templeton. I was interested in this book because Billy's family lives in my area, and I drive past his training center, The Cove, every day. I wanted to know more about what made this man become such an amazing evangelist.

Learning about the events that shaped Billy Graham's life, and seeing the obvious part God played in his success, just adds another layer that deepens my respect for Billy and his family.

However, that way that the authors chose to portray some of the events in Billy's life just seemed a bit flat to me. I don't normally read biographies, so perhaps I'm just used to the action in good fiction! But the struggles seemed resolved too quickly and easily. Almost glossed over. Those, to me, are the good parts that make a biography real. I would have liked them be a bit more detailed. The dialogue at times was a bit bland as well.

Keep in mind, though, that this book isn't written from Billy's perspective: this tale comes from the mind of a dying man with Alzheimer's. His perception of the events is bound to be less intriguing than Billy's own.