Winter Math:
A Dusting of Snow + Ice beneath = Car Left in a Strangers Driveway
I made two attempts to get to work today. Really I did! My first attempt was solo, and the steep, uphill part of my driveway did me in. I had to back downhill and around two curves just to get back to my parking spot. And I almost didn't make it back!

Fast forward an hour. My husband had shoveled a path up the driveway, and thought that he could get me to the main road.

He got us turned completely sideways, so that our neighbors were blocked in as well. Two bags of ice-melt later (thanks, Mark!), and we finally got out of the driveway.

To find the main roads worse than the driveway. No sand/salt trucks or scrapers here! (I love living in the sticks!)

We ventured down the street to where we could see downhill to the four way intersection we go through to get to the main highways. We had a good vantage point from the top of the hill, and watched car after car slide sideways to the intersection, sit in motionless silence for a moment, and then continue on, only to get stuck in a curve at the foot of the hill. (Edited to add: turns out it became a 13-car pileup!)

We decided just to go back home. Because we didn't want to end up like this guy: 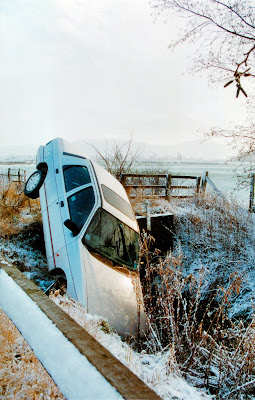 That was easier said than done. We couldn't get back up the slight incline we had just come down. We almost left our van in two different driveways, but didn't want to block someone else in. (like THEY could get out!) Didn't want to leave it on the side of the road for someone to slide into, either.

Fortunately, we were able to navigate it behind an RV, getting us out of the road, and not blocking anyone in.

But then we had to walk home. :-( In the snow and ice, in tennis shoes (I don't have any boots). With no gloves or hat, because they have mysteriously vanished. (Yes. I am totally prepared for winter - why do you ask??)

So, if you'll excuse me, now I'm going to find a nice hot cup of something to drink and thaw out. Because my ears and my feet are cold.

But, on the bright side, I get a free day of knitting, web surfing, and maybe a nap!!!!