The Leper at Christmas Dinner 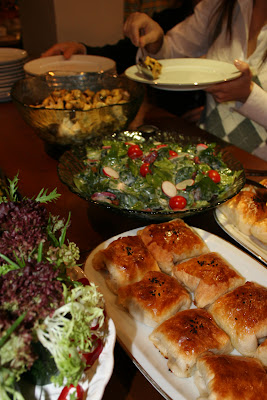 "Let us not become weary in doing good, for at the proper time we will reap a harvest if we do not give up." Galatians 6:9

This year, as I've mentioned before, I've felt kind of "Scrooge-y." I didn't want to shop, and I was so over all the hype. This year I really wanted to focus on the CHRIST part of Christmas, and not on all the other stuff people think it's about.

And I got to see Jesus this Christmas, right in my parents' house.

I'll just say it: we have more than one black sheep in our family. We don't have one skeleton, but a closet full of them. We aren't perfect. But thank God that we don't have to be, because He sacrificed His perfect Son for us!

And we forget that so easily. We forget to be good, to live as God asks us to because often that is hard, and uncomfortable. We shy away from the sinners, the troublemakers. It is even easier as Christians to forget that we are still sinners. We just happen to be forgiven ones.

I have a cousin who is one of those black sheep. For the past few years, he has spent Christmas with my family, because he doesn't have any other. His brother committed suicide after struggling with permanent paralysis from a motorcycle accident that they were both involved in. He discovered his alcoholic mother's body several days after she passed after climbing in her window when she wouldn't answer her locked door. He too, is an alcoholic, who lives in a camper by the river. His wife and daughter left him, and he has to work outdoors because his coworkers fear ignorantly that they can catch his hepatitis by being near him. He has spent time in prison, and sometimes goes by his brother's name to avoid being arrested on old warrants.

My cousin is a modern-day leper.

My mom invited him to join our Christmas dinner a few years ago, and he has invited himself in the years since. This, among other things, irritated her and others this year, but she was always gracious to him, serving him food and encouraging him to take more. I'm sure he is starving but he never takes much.

He reeks of liquor every time I see him. His face has aged much too quickly, but he still has the heart of a child, deep down. He calls me "ma'am" and minds his manners, and quietly watches all the festivities surrounding him. He is never intrusive, and goes almost unnoticed.

This year several aunts and uncles bought him clothes and necessities. The packages were not marked with his name, but they were under the tree, just like all the rest. He wasn't expecting them, I suppose, because his face lit up with surprise and delight when he was given three large bags, full of gifts.

My mom may have initially been annoyed at his presence, but she got over it. And she was able to be like Jesus to him. She reached out and showed him love. She was weary of hurrying at the last minute to include him, sending many of us scrambling to find gifts to give him. But still she made him feel welcome.

She touched the leper.

He was loaded down with leftovers, and driven home with much more than he came with. I hope he went back to his camper with that warm feeling of acceptance and love that we all seek. I pray that in that experience he sees hope, for a better way, a better life. I pray he recognizes that Jesus was there, right in our midst.

That feeling that I'm sure my cousin had that night? I want that. I want that every day. I want to remember every day that I disappoint God, that I am unworthy of any blessing, that I am still a sinner. Just like my cousin.

Then I want to remember that even though I am a dirty, smelly, disappointment in many ways, God doesn't grow tired of loving me. Of feeding me one more plate of food. Of clothing me, and placing a solid, warm roof over my head. I want to feel so blessed that my face lights up at the mere thought of it!

I am that blessed. So why is it so hard to remember?


Dear Lord, I am so unworthy of the blessings you shower down on me. Yet, You love me anyway. Help me to remember to reach out to others, to plant that seed that was once planted in me. Grow that seed Lord, so that others may see Your Glory through my obedience to You. Grow that seed in their hearts so that they may know You, too. God, let me reap the harvest of your blessings by strengthening me, not letting me grow weary, but instead letting me love someone like You would. And may You reap a harvest of souls, Lord, praising Your Holy name all the way...