Of Mice and Women

Isn’t it funny how one day can seem such a struggle to follow God, and other days it’s a breeze? How when you bless others, God often blesses you as well?

Peggy, a notoriously grumpy coworker of mine, had seen a knit toy mouse in a pattern book that I had, and she just fell in love. She made such a fuss over that picture in the book that I just had to make him for her, and so I did. 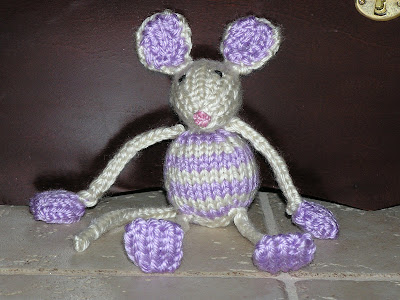 Yesterday I gave him to her. She was so excited! First she put that little guy next to her computer keyboard, and then she moved him to the shelf overlooking her workspace. Finally, she put him in the breast pocket of her lab coat! She positioned him just so, with his little paws and tail protruding, his tiny head peeking over the top. She made it a point to show him off everywhere she went.

She was obviously very pleased with her gift. That did my heart such good to see how happy that simple act made her.

So my friend Rhonda and I were having coffee and dessert last night, when Rhonda gave me her own gift at the beginning of the evening when she bought my coffee and torte. What a nice surprise! We discussed Peggy’s affinity for stamping and card-making, and how happy Rhonda was when she received a handmade Christmas card from her this year. We laughed about Peggy's reaction to her little mouse, and how she really isn't all that grumpy if you just pay her a little attention. She's a lonely widow with panic attacks, her daughter committed suicide, her son is "sowing his oats" after a divorce, and she is retiring from her lifelong laboratory career this spring. She's had a hard life, so I can understand where her miserable moods come from.

Most people tiptoe around her for fear of starting an argument. But I try to engage her. I don't know why. I've always gotten along with the more "difficult" personalities, and she is simply another one of them.

So what happened? This morning I found a hand-made “Thank You” card that Peggy had made for me herself. (I'd take a picture, but my husband has my camera at the other end of the state!) As I gushed over my beautiful card, I told her how much Rhonda had enjoyed the Christmas card she had given her this year. Again, Peggy was delighted, but this time by hearing how her card had impacted Rhonda. She said that it made her feel good to know that her efforts were appreciated.

Yes, Peggy. I know. It does feel good to know that you made a difference to someone. :-)

I know I'm often guilty of thinking that I have to be serving in a big, established ministry to be a servant of God. But the fact is, doing what you enjoy and sharing it with others in a way that shows them love and friendship is exactly what being a servant is all about

Take the time, and invest in someone's life. Learn their likes and dislikes. Listen to their funny stories and their heartbreaking ones, too. You'll be surprised at what kinds of things you can do easily for others, with no big ministry in sight, that make you a servant of Christ...

"God has given each of you a gift from his great variety of spiritual gifts. Use them well to serve one another." 1 Peter 4:10 (NLT)