I don't think there is a mom alive who, at least once, thought, "I am the worst mother ever." Can I get an "Amen?"

I have really been struggling lately, in general, but especially with my five year old. I won't go there now. I could write all day! But the whole parenting thing has had me thinking.

My dear friend Linda had two handsome teenage sons when I first met her. I was always struck by how they hugged her, and seemed to WANT to be around her. Even in public. And I remembered thinking to myself, "I hope Michael is like that when he gets older."

What? Teenage boys willing to be seen in PUBLIC with their mom? And showing AFFECTION? Must have been a dream...

Well, I've been thinking about my own teenage son. He was only four when his dad and I divorced, and of course I feel guilty over how that may have affected him. Somehow I always feel like I'm a bad mom to him. I was driving in the car the other day, just thinking random thoughts, and I remembered a book title that I had recently seen that basically said "realizing that you already have what you thought you wanted."

And it hit me. I could see my sweet teen hugging me when he gets home. Hugging me goodnight. Putting his head on my shoulder when we stand in the kitchen.

I HAVE that sweet teenage boy who hugs his mom, and wants to be around her. I was very far from God when I first witnessed this with Linda and her boys. But our faithful God heard me, even then in the midst of my wandering. Now, ten years later, He has blessed me with just what I wanted. 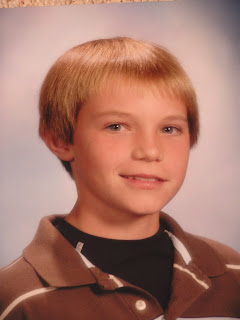 How great is our God who took ten years to fulfill a heart's desire, but who also timed it so that it would encourage a troubled mother's soul...